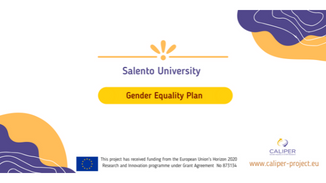 Our CALIPER project partner, the University of Salento, officially published their approved Gender Equality Plan (GEP), which has been developed within the context of the CALIPER project.

This GEP is the outcome of the internal and external assessment that has been conducted during the past months.

According to the European Commission, the publication and official endorsement of the GEP is the first building block for the GEP to be effective.  Moving further, the plan should be actively communicated across the institution to increase awareness, engagement and commitment to the actions foreseen in it.

In this regard, UNILE, on the 27th of January 2022, organised an internal session aimed at officially presenting the GEP to the Academic Senate. The goal of this event was to further disseminate the plan to the internal stakeholders and engage them in UNILE’s vital campaign, towards a more gender-equal STEM community.