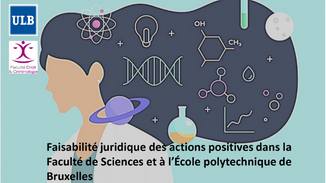 At the Université libre de Bruxelles, women represent only 24% of the academic body in the Faculty of Sciences. At the Brussels School of Engineering, this percentage drops to 9%. To equal the scales for women in STEM, CALIPER and ULB’s Equality Law Clinic (ELC) have joined forces. The ELC is an organisation that belongs to the University, that allows students to deepen their legal skills while contributing concretely to the promotion of social justice, equality and fundamental rights, by working for the benefit of disadvantaged or excluded groups, according to an approach combining the local and the global.

As part of the second measure of the ULB’s inclusive Gender Equality Plan (GEP), CALIPER deployed ELC’s expertise to conduct a legal feasibility study on the adoption of affirmative actions in the context of the university and higher education system. The study provides critical insights into both the national, European as well as international legal landscape for implementing affirmative actions, and provides valuable recommendations for higher education institutions.

It supports the advancement of key objectives to strengthen gender equality in innovation and research:

(ii) to promote the fair participation of women in the decision-making processes, and

(iii) to better integrate gender perspectives in the development of research.

Curious to learn about how affirmative actions can reinforce gender equality in research and innovation?  Study has been published and available here [in French] 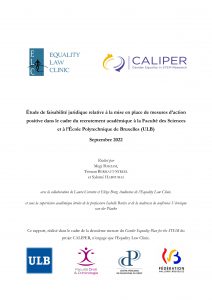