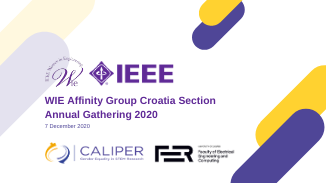 The Women in Engineering (WiE) is one of the three Affinity Groups within the Croatian Section of the IEEE and it was formed in 2009. The group counts 34 members and 10 more honorary guests, holders of the “Golden Diploma” of the Faculty of Electrical and Computer Engineering (FER).

On December 7, 2020, the WiE members took part in the annual gathering of the group to present the activities interlinked to WiE’s scope and elaborate on future steps about the group’s target actions and promotion.

In this context, CALIPER partners addressed the group presenting the project and its goal to deliver a Gender Equality Plan tailored to FER. The organisational team of FER informed WiE members about the implementation phases of CALIPER, the quadruple helix approach regarding the engagement of external stakeholders who can facilitate the sustainability of the project outcomes and its vision to contribute to the enhancement of female researchers’ role in STEM scientific fields.

More information about the event is available on IEEE Croatian Section’s website.