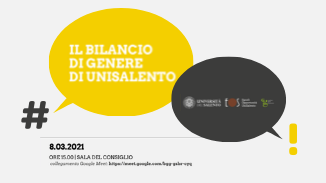 On March 8, International Women’s Day, the University of Salento presented the first “Gender Balance Report”, an essential tool for achieving gender equality and integrating the gender perspective in all University policies.

The event was broadcasted live from the Salento University Rectorate council room, and it was chaired by Rector Fabio Pollice, the Director-General Donato De Benedetto and the Delegate of Gender Policies Anna Maria Cherubini.

In addition, Prof. Rosaria Rinaldi represented CALIPER and informed the audience regarding the scope of the project. She elaborated on the importance of gender balance among the academic community and the integration of the gender dimension in STEM studies as innovative factors that will enhance scientific excellence.

What is more, Prof. Rinaldi explained the quadruple helix approach followed by CALIPER project partners to engage facilitating stakeholders from academia, public institutions, business sector and civil society with the project procedures that aim to deliver a Gender Equality Plan for the Salento University. Through the creation of a Research and Innovation Hub, she mentioned, the Salento University will be able to align its Gender Equality Plan with the innovation ecosystem of stakeholders that surround the University, as well as to share valuable resources with the engaged organisations outside the CALIPER consortium that seek to set up their own gender equality strategies.

More information about the event’s main outcomes can be found here.

The recorded session is available (in Italian) via the Salento University’s YouTube Channel: