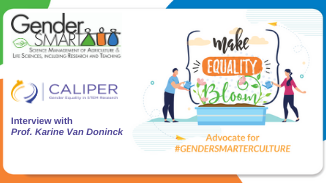 Interview for the Gender-SMART 26 days Campaign

The CALIPER project has been an active contributor to the joint campaign of Gender-SMART.

The Sister-Project, organised a 26-days’ campaign to power up a gender-sensitive culture within research and academia’s funding and performing organisations (RFOs and RPOs) in the fields of agriculture and the life sciences.

The campaign covered the period between the two important dates of the 11th of February (International Day of Women and Girls in Science) and the 8th of March (International Women’s Day).

The content of the communication campaign has been articulated in different steps covering the 4 weeks: interviews, general content about Gender Culture (definitions, data, figures).

In this regard, the CALIPER project interviewed Prof. Karine Van Doninck, is a biologist and Full Professor at project partner ULB – Université Libre de Bruxelles.

The full article has been uploaded at Gender-SMART dedicated page.