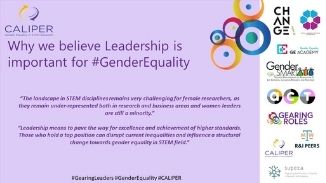 The CALIPER project has been an active contributor to the joint campaign #GEARINGLeaders organised in May, 2020 by the sister project GEARING-Roles.

As an attempt to enhance the relevance of the presence of women in decision-making structures, the GEARING-Roles consortium decided to launch its first dissemination campaign around this topic, with the main objective of raising awareness on the lack of female leaders in Higher Education and Research institutions and on the need of fostering their access to top management positions.

In this regard, the CALIPER project was active by making relevant posts on its social media accounts engaging its project partners.