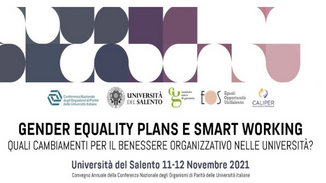 Outcomes of the Annual Conference of the National Association of the Equality Bodies of the Italian Universities, which was held at the University of Salento on 11-12 November 2021, on the theme Gender Equality Plans and Smart Working: what changes for the organizational welfare in the universities

The Conference represented a useful opportunity to share the best practices initiated by the various Italian Universities for the implementation of smart working, initially dictated by the emergency condition imposed by the spread of the SARS-CoV-2 virus and subsequently by the awareness of the positive impact of the same on the well-being of employees.

There were two sessions specifically dedicated to the GEP theme, which gathered national and international contributions and gave resonance to the scenarios outlined in the H2020 CALIPER project, also thanks to the participation of several European partners participating in the project, who shared the experiences gained in their respective national contexts and wide-ranging reflections on the subject. The significant implications of the Caliper project in relation to the development of gender policies were highlighted by the interventions of speakers partner of the project: Anamari Nakic, from University of Zagreb; Maria Sangiuliano, from Smart Venice (Italy) and Rosaria Rinaldi, Caliper project manager for the University of Lecce.

Keynote speakers were invited to give their scientific contribution on some of the leading topics: Sara Aguirre, from Université Libre de Bruxelles, partner of Caliper Project as well, provided a critical view of the link between gender issues and work organisation; Lorenzo Zoppoli, from University of Napols Federico II, explored the topic of smart working between emergency experimentation and structural multifunctionality.

Also of great interest was the contribution offered by Lina Gálvez Muñoz, the Vice-President of the ITRE Committee (Industry, Research and Energy) of the European Parliament,  member of the FEMM Committee (Women’s Rights and Gender Equality) and the Panel for the Future of Science and Technology (STOA) of the European Commission, who emphasised the shift from research to action on gender equality.

Through targeted round tables, significant synergies were created with local, regional and national institutions, thanks to the participation of, among others, of  the Councilor for Gender Policies and Equla Opportunities of the Municipality of Lecce, the Head of the Gender Agenda of the Puglia Region, the CRUI (Conference of Italian University Rectors) Representative for the Commission on Gender Issues, the President of ANVUR – National Agency for the Evaluation of the University System and Research, the President of CoDAU (Conference of General Managers of University Administrations).

The Conference also hosted the Annual Meeting of the Association, during which Anna Maria Cherubini, Vice-Rector for Gender Policies, was elected to the Steering , role that will also facilitate the implementation of the measures envisaged in the framework of the Caliper Project at national level.